The 14th Firebird Developers Day was held in the city of Piracicaba — SP — Brazil, in July, 29 2017, at Espaço Beira Rio. The conference is organized by FireBase, and had the presence of 300 attendees coming from dozens of cities and different states of Brazil:

The sessions grid (see below) was composed by several inedit subjects. 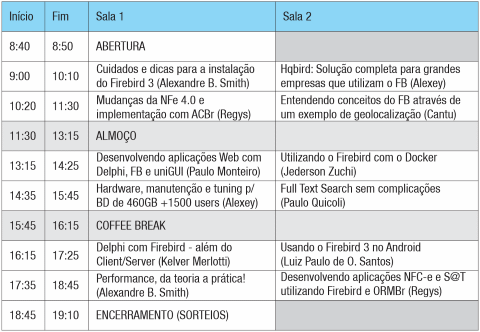 In the final session, there was a raffle for the attendees, with dozens of items (licenses, courses, tools, etc) offered by our sponsors and supporters. The attendees also could buy products from our sponsors/supporters with very special discounts.

I want to thanks everyone for the presence, not forgetting the speakers, staff, sponsors and supporters. I hope to see all of you again in 2.018!